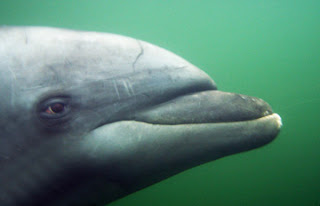 Recently we were in Florida, visiting our friends at SpeakDolphin.com, where we were hosted to present an evening of Dolphin Embassy news and updates to a community of old friends, new friends, and a variety of local experts on dolphins and whales. We had a wonderful time sharing the news of our latest work, and viewing footage from several dolphin and whale researchers.

While in Florida, one focus was to catch up with the team we have been collaborating with on a special research project. This project was focused on a stranded dolphin, her conditions, and the birth of her calf.

Castaway was stranded on Castaway Beach in south Florida. She was a single stranding, an unusual event. When she was examined, it was discovered that she was unusual in other ways. She was pregnant, and she was deaf.

How a dolphin becomes deaf is not fully known. She may have suffered ear infections -- she had none at the time of her stranding -- she may have been born deaf. Most likely she was the survivor of infection. Her pregnant condition may have forced her to choose to head toward land, as her deafness probably left her feeling very vulnerable. But then, what do we know of the choice to head toward shore by a dolphin?

In any case, she presented both huge challenges and some special opportunities for research.

A team was formed to address her situation and she was transferred from the original stranding organisation's facility to a facility we have become familiar with, the excellent Marine Mammal Conservancy, on Key Largo.

Because of her situation, her questionable health, and the need to keep her isolated from other dolphins, we knew that her infant was going to be without an essential element in its development in the womb -- no sounds from other dolphins, or from Castaway herself. Castaway made some sounds, but similar to deaf humans, there was little dynamic range or variation to her sonic output. We decided to enrich her environment by providing supplemental dolphin sounds.

The first and easy part was to get recordings from Dolphins Plus, a few miles away, of their pregnant dolphin and the others who shared her pool. These recordings were played to Castaway -- and her growing fetus -- in two daily sessions. The next step was more difficult. We wanted some kind of live interaction for the new infant. We arranged to have a telephone link set up to provide a live and open phone line between the two facilities! This was widely reported in the national and international media.

We wondered: "How does a baby dolphin gain it's language?", "Where does the signature whistle originate, from the young calf, or from the mother?", "How will a mother communicate with her calf without sound?", "How will a deaf mom affect the calf in it's feeding?", and many more questions.

We decided to set up 24 hour video and sound recorders to watch the process.

Sadly, the calf was born only to perish five days later. There was nothing more that could have been done. To see the full story of Castaway and her son Wilson, visit www.marinemammalconservancy.com 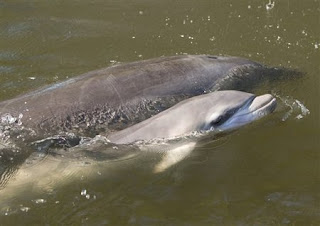 Research continues with Castaway, but the opportunity to watch the process of language acquistion by a new calf will have to await another opportunity. Will Castaway become pregnant again? Time will tell.

When we visited, we were able to go to the MMC, see the amazing birthing pen that was built, and then go to Dolphins Plus, where Castaway now makes her home. We were invited to swim with her.

This was truly a highlight in our 25 years of dolphin interaction, and literally hundreds and hundreds of dolphin swim encounters. What an amazingly different dolphin she is.

Castaway can be, with all due respect, be thought of as a sort of "human-like" dolphin, in that she depends entirely, as we do, on her sight and touch in the water. She was more than friendly...she approached right away and began to caress us. She swam beside us, so close we had to backpedal to be able to take pictures. She gazed into our eyes, closely and steadily. Her gentleness -- she is a very large Atlantic Bottlenose Dolphin, at least 2.5 meters long -- and presence were startling in their power. We were deeply moved by her tender play and seeming fascination with these new people.

After so many months of having humans lift her, measure her, help her thru a difficult birth, the loss of her calf, and all the odd things we humans do when trying to care for dolphins in distress -- hydration, injections, massage, staring at them night and day -- after all that, she was so gentle and loving, so very close and curious about us.

Thank you, Castaway, for one of our most amazing encounters. We will continue to visit you, to spend time contemplating the destiny that brought you to the human world, and the role of Ambassador that you play.

The Ambassadors
Posted by C Scott Taylor, PhD at 10:46 am