In defense of Dolphin-Assisted Therapy 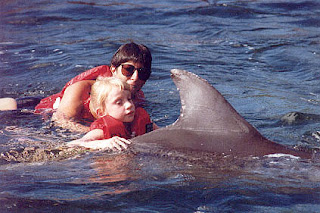 The Whale and Dolphin Conservation Society (WDCS) has recently chosen to start a campaign against Dolphin-Assisted Therapy (DAT). Using a recently published paper, they claim to have scientific evidence that DAT is ineffective.

There are a few problems with this…

As the founding Director of the Cetacean Studies Institute, founded in 1996, and long-time researcher into the effectiveness of Dolphin-Assisted Therapy (DAT), I feel compelled to comment.

The review of DAT research cited by WDCS written by Marino and Lilienfeld has many errors in it. Titled “Dolphin-Assisted Therapy: More Flawed Data and More Flawed Conclusions”, it is itself littered with flaws.

Without any clear definition of what Dolphin-Assisted Therapy is, the Marino-Lilienfeld paper makes unsupported accusations against well-developed and well-proven therapeutic programs of therapy that include dolphins. It does not adequately differentiate between real DAT programs and “swim-with-dolphins” programs.

The paper suggests, for instance, that any person swimming with dolphins is undertaking some kind of intentional therapy. It cites research having to do with injuries sustained by people in commercial swim programs, and it cites only one side of the debate about whether diseases can be transmitted between dolphins and humans as part of its basis for describing DAT as an “unsubstantiated intervention”.

Here is the final conclusion in this paper:

“At the very least, we believe that DAT practitioners should be required to inform parents and, when relevant, participants, of the absence of evidence for DAT’s enduring effects on psychological symptoms. Only then can consumers of DAT make adequately informed decisions regarding the costs and benefits of this unsubstantiated intervention.”

Yes, DAT is, so far, unsubstantiated by the research cited by Marino et al.. Does this mean that it is ineffective?

The main issue here is whether DAT has a positive and long-lasting effect on the lives of patients and their families. Instead of addressing this question, which would necessitate actual research, extensive interviews, arranging for standardized measuring instruments to be deployed to discover and document changes, and a host of other expensive and time consuming research, Marino and Lilienfeld have taken the safe arm-chair route. They have reviewed some of the very few research papers ever published to see if they can stand up to an extremely rigorous analysis of their scientific validity.

Reviewing the validity of research is not the same as doing research.

We could all benefit from a review of the available research and suggestions about how it can be performed better. If this had been their intent, Marino and Lilienfeld's review could have been truly useful. Instead, they selected papers to critique and pursued a predetermined mission to condemn DAT -- without doing any research themselves into the effectiveness of Dolphin-Assisted Therapy.

In our many years of studying DAT, visiting facilities, interviewing therapists, patients, family members, trainers, doctors, medical technicians, as well as filming dozens of sessions, collecting patient stories, and operating a small Wellness Program ourselves, we have seen many wonderful results.

Literally thousands of families have had their entire family history changed for the better through the effectiveness of good DAT programs.

To date no one has created an accurate definition of Dolphin-Assisted Therapy. However, just as the Supreme Court Justice said, “I know it when I see it”, one can visit some of the DAT programs around the world to see what it is. We recommend Island Dolphin Care, in Key Largo, Florida (www.islanddolphincare.org) as the most professional, effective, and long term program, under trained medical professionals, run as a non-profit organization, as the model for high standards.

The results -- improved lives -- are the means by which to evaluate DAT.

Our program (www.dolphintale.com) here in Australia works with rescued dolphins and their progeny. These dolphins would be dead, long ago, if they had not been rescued. Now, as dolphins living among humans, it is important that they have life experiences that are enriching, stimulating, and as safe as possible to help them maintain their health. We know that our interactions with these dolphins are a real benefit to them as well as a benefit to those people who swim among them.

DAT needs to be investigated more fully. Research needs to be done by competent, well-funded scientists, who have no bias or agenda to push. Until this is done, we will have ill-informed campaigns such as the WDCS campaign, and the misdirection of papers such as the one by Marino and Lilienfeld.