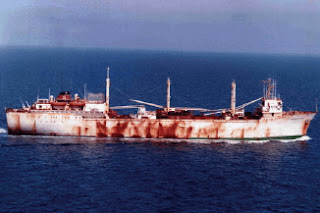 A remarkable report has just been published detailing the illegal whaling activities of the Soviet Union in the years between 1955-1978. The information it is based on is impeccable: the actual reports of the whaling ships themselves, from a Russian government archive in Vladivostok, Russia.

"The authors (of the original reports. - ed.) were all scientists who worked at different times with the whaling fleets concerned...

The reports document dramatic declines in abundance, disappearances of whales from previously populous feeding and breeding areas, and a continual decline in the average size and age of animals in the catch as the over-exploitation reached critical levels. Also recorded are the repeated warnings of the reports’ authors that the catch levels could not be sustained without severe damage to (or extirpation of) the populations concerned. However, it is apparent that all such warnings were routinely ignored by the Soviet authorities in their quest to meet high production targets."

A pdf of the full publication is available for free download at:
http://www.afsc.noaa.gov/Publications/AFSC-TM/NOAA-TM-AFSC-175.pdf

The era of Russian illegal whaling was one of terrible consequences. Despite the International Whaling Commissions attempts to curtail whaling, to make it sustainable, various nations and many illegal pirate whalers (notable among them was Aristotle Onassis, whose pirate whaling activities were among the worst) kept up the relentless slaughter. When the moratorium (def: a temporary cessation of activities) was finally put in place in the 1980s, it was too late. The affected whale populations were doomed, and still have made, in most species, little headway toward species survival.

Now, with sonic pollution from many sources, military, industrial, and oil and mineral exploration, plus the ongoing drone of global petroleum shipping, the large whales have little chance of recovery. As mostly solitary whales, they depend on sonic messages to locate each other for mating, and can no longer find each other easily. It is too noisy in the whale's bedroom...

What have we done to Mother Ocean? It is time to take a good long look at what we have done, and begin to rethink our priorities. It is time to shape ourselves to meet the needs of the world, rather than endlessly expect the world to shape itself to our needs.

The Ambassadors
Posted by C Scott Taylor, PhD at 3:20 pm