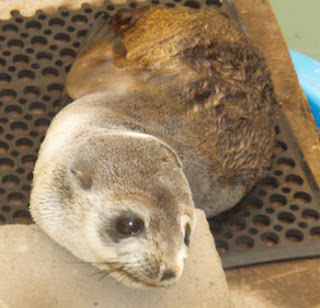 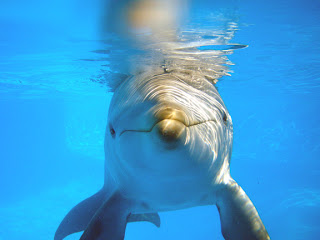 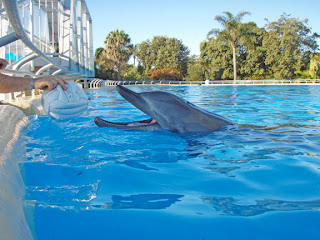 We went for a short visit this afternoon, to see our friends, Buck, Zip, Calamity, and Bella. All were in good form, each doing something unique to show us they remember us.
Buck came over to us, at poolside, right away, staying long enough to identify us, let us stroke his rostrum, then went his own way. He had things to do...
Zip came over and watched us, then, when I put a ball in the pool, he grabbed it and began offering it to me. He would push it toward me, then back away with his mouth open wide. I tossed it to him about 20 times, then began pushing it down under water and letting it go, so he could catch it. He seemed fascinated by this, giving it his full attention. A nice game, we played for another few minutes before he took the ball over to Amanda.
Calamity came over, looked at me, slid onto the side of the pool with her face, and stopped still. She looked, then slid back into the water, and began a circuit of the pool.
Bella had held back for a while, then began swimming alongside Calamity, doing the circuit. It was like old times, when Bella was tiny, a shadow under Calamity all the time. Then Bella decided to come close and gave both Amanda and me a kiss, putting her rostrum over the wall, holding still, while we bent over and kissed her. She gave us each one, then swam off.

Amanda got the camera out (a small Olympus that can be used under water) and took some photos. Of course, Bella came over right away, to see what was happening, and since she loves cameras, posed for some nice shots.

It was a nice visit. We learned that a small seal had been brought to the rescue facility only days ago, and we got a peek at it. So tiny, vulnerable looking. We hear it cannot be released, so it will become a resident somewhere, perhaps here in Coffs Harbour.

Another day for the Embassy...

The Ambassadors
Posted by C Scott Taylor, PhD at 9:54 pm